It’s week 2 of teleworking. While you would normally celebrate the fact that you can stay home and be productive, the Covid-19 is forcing us all to take this as an every day routine. I’m fortunate to have my own place and comfort, no childrens to care about aside from my job and just so, I’m wishing all that are reading this article a safe time at home.

So motor sport and world crisis or back to 1939 and the beginning of the Second World War. As I continue my daily routine around the world of historic motor sport, it is an interesting time to look back at how the world shaped one of the shortest season ever.

In fact and before the world came to a halt during September 1939 when Germany started its invasion on Poland, the Association Internationale des Automobile Clubs Reconnues (AIACR) which pre-dated the Fédération Internationale de l’Automobile (FIA) had been staging the seventh season of its so-called AIACR European Championship but one that does not officially count for the records.

Some other aspects spring to mind when considering that era or year, the first being the fact that although there were multiple entries to the four races held officially, all the wins came to the German manufacturers, Mercedes-Benz taking the Belgian, German and Swiss Grand Prix while Auto-Union took the French Grand Prix. A tale that would presumably define the years and battles to come.

The death of Richard Seaman at the Belgian Grand Prix in Spa, Belgium on the 25th of June and first race of the Championship. The fact being that Richard Seaman from Chichester, Sussex, England had been one of the greatest driver of its era. He drove for Mercedes-Benz from 1937 onwards and against the will of his family who did not want to see him drive for a “Nazi” team. Of course, he was also pictured numerous times giving the Nazi salute, most notably when he won the 1938 German Grand Prix at the Nordschleife. He unfortunately died away from his family in Belgium, due to severe burns sustained after he crashed on the 22nd lap of the race and left Erica Popp, daughter of the head of BMW as a widow that same day. 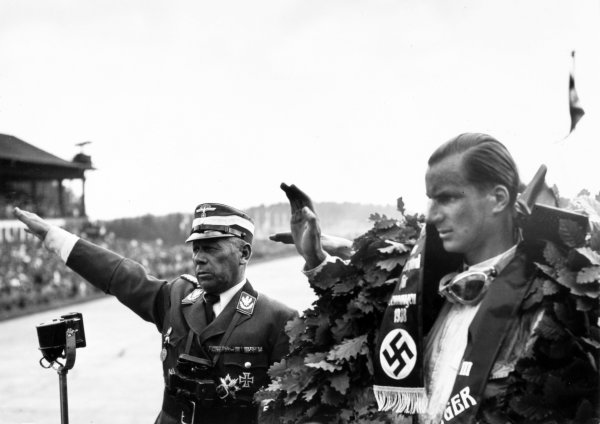 Later in the year, a champion was declared by the Nationalsozialistisches Kraftfahrkorps or NSKK, a Nazi transport entity that supported the German manufacturers during the previous to war motor sport efforts. It is believed that according to available classification, Hermann Paul Müller should have been the overal champion but Hermann Lang was declared the champion. This due to national propaganda and the fact tha Lang was considered far higher by the party officials.

The craziest aspect of that being the fact that unofficial races still happened and that Tazio Nuvolari would take on possibly the last win of that era at the Belgrade Grand Prix in Serbia on the 3rd of September, the exact same day that France and Great Britain declared war on Germany.

Tazio Nuvolari walking out of his Auto Union. #WinnerChickenDinner

A total of 4 Championship round were held while 14 additional so-called Grand Prix were held around the world and up until 31st of December in Brasov, Romania where BMW won. Still, it wasn’t the last as a Grand Prix took place in Tripoli, Libya in 1940 and this time another Italian would triumph with Giuseppe Farina at the wheel of an Alfa Romeo.

So now and when I read the question as to when motor sport will resume, I believe it’s better to stay home and concentrate on the next episode.