It all started in 1978 with an experimental bike named the ELF-X. 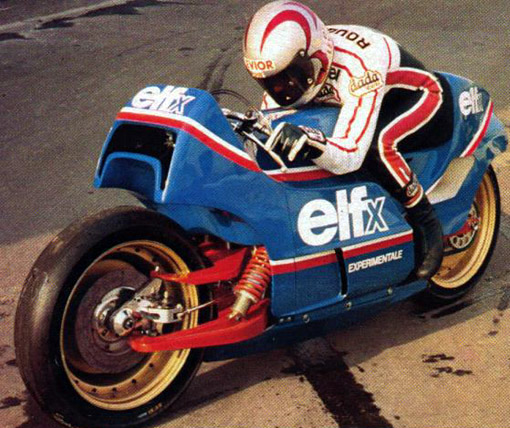 Powered by a Yamaha TZ750 engine, the ELF X appeared in “concept” form at the 1978 Paris Show. An all new type of design and rethink of the conventional racing motorcycles of the time.

The project was designed by French engineer André de Cortanze then a Formula 1 engineer and the basic idea behind the bike was getting rid of all preconceived design of what a motorcycle should look like. The aim was to lower the center of gravity, add an antidive suspension and reduce weigh as well as having a chassis forming its own entity and not just a support. Other key features were the balance of the weight distribution, 50/50 if possible, improved aerodynamics, quick change system for the wheels.

Having all that, the cooling was also reworked and improved as well as the possibility to tweak the set-up of the bike easily. A very complicated project but it didn’t scare the man !

Built and engineered in his spare time at Renault. The front fork was to be replaced by a parallel arm suspension and at the back, a single-side swingarm would held the rear wheel. Chassis side, there was NOTHING ! The engine would play the stressed-member and hold everything in place. The fuel tank was located under the engine to lower the weight and wind-tunnel was used heavily.

One word sums it up, RADICAL. Yes, that was the ELF X.

Track testing began in 1978 with Michel Rougerie prior to the official debut of the bike later that year at Nogaro. The concept proved complicated and the engine was no good for the “stressed-member” idea and André de Cortanze being unable to work full-time on the project, it was not as good as expected.

Nonetheless, a manufacturer was interested, Honda. A private test was held in 1979 with Honda’s own test rider and a collaboration was then launched so Honda would provide the “works” 1000cc RSC endurance engine for the 1980 season and de Cortanze would begin to work on an all new design from the lessons learnt.