Part 2 of the Renault 5 Turbo story and after the genesis of the whole project and how it got into production, let’s talk about the competition versions of this hot hatchback.

Of course and as said previously, the Renault 5 Turbo was first thought for competition, hence its development and the whole Homologation process. The car was first homologated in the FIA Group 4 category as this was back then, the top category for rallying.

Let’s introduce first the Cévennes type which was more or less, the customer version of the 1981 works car and homologated in Group 4. All presented in yellow, 20 of these cars were produced and available as ready to run cars from the factory but a conversion kit necessitating around 300 hours of work was also made available so street versions could be converted.

Modifications included lightened body panels, reinforcement of the shell as well as safety devices such as the 10 point rops and Stand 21 racing seats, harness and competition “Moto-Lita” steering wheel. Drivetrain and suspension were converted to uniballs and dampers would become double-adjustable ones. Front anti-roll bar diameter was beefed up for more rigidity as well as the mounting points. Braking side, the original ventilated discs were replaced by ventilated and cross-drilled versions and specific master-cylinder and break balance device.

Engine and gearbox mountings were reinforced as well even if power was more or less the same compared to the street version but an air/air heat exchanger was added so the “185 chevaux” extra engine kit could be added as sold by Renault Sport. Bosch electronics were also updated to accommodate the competition needs as well and finally, the gearbox was properly competition updated with proper racing gear-rations and a ZF limited-slip diff added.

A final version of the Cévennes kit would be introduced in 1982 as the French Rally Championship became a “mixed” one and the cars remained in Group 4 but were called the “Cévennes 2”.

Second version appeared in 1982 which was also the year and introduction for the FISA recognized Group B version with the so-called Renault 5 Turbo Tour de Corse. Again, 20 cars were built and made available by Renault Sport and a kit would also be sold so cars could again be converted.

Rops were updated, passing from 10 to 16 points for a total weight of 930kg. Shell side, the bodywork was strengthened as well as the drivetrains again. Engine would stay the same in terms of displacement, 1397cm3 but the turbo would be updated to a Garrett T3 as well as the whole engine and turbo layout being updated. In situ, the turbo would sit behind the engine on its right side while in the Cévennes, the turbo was more or less located on the intake side.  The whole change permitted the engine to pass from 240 to 285 horsepower and lag was in a way reduced. Depending on evolutions added as for example, the 1984 works cars entered at the Tour de Corse had more or less 320 horsepower. Gearbox was updated to an even more effective set of rally ratios, brakes were left to Cévennes specs and the Minilite wheels received the latest Michelin TRX tyres. All in all, it permitted the cars to be closer to the Maxi Group B version as used by the works team.

And third and final version was to be the Renault 5 Maxi 5 Turbo, the steroids were not enough to get the two-wheel drive cars closer to the all-wheel driven cars that Group B had produced so this time, La Régie thought of going nuts on development as well as analyzing the whole regulations in order to find the best fit for the car.

As said in the part one and genesis of the Renault 5 Turbo story, in late 1984, 200 Homologations specials were produced again by the factory as “Série 8221” cars and these were made in order to homologate the Maxi version in the upper engine category as they were fitted with a 1430cm3 engine.

Development was focused on 3 main areas, engine, suspension and aerodynamics. 20 proper rally and factory available cars were officially built with a kit being again available to make the evolution possible from already rallied cars. The shell was again updated and reinforced and received an aluminium roof as well as an updated version of the rops, still 16 points but all in all, the car would give-up 25kg and stand at 905kg.

Bodywork side, the whole car would be studied in a wind tunnel to get better front and rear balance as well as enhancing the downforce. Engine side, it was all about that upper engine, in situ, 1527cm3 displacement as well as the turbo now being massive let’s say. Power would increase up to 350 horsepower and say, 405 at its peak ! Gearbox was strengthened again and ratios updated but still a 5-speed gearbox. Braking would be updated with larger and bigger ventilated discs and tyres had changed so Michelin TB20 were fitted on magnesium monobloc wheels.

All in all, the Renault 5 Turbo was on performance side, a crazy bit of kit, tiny, light and powerful, a proper rally car and results speak for themselves with 3 victories in the World Rally Championship, 1st one being the 1981 Monte-Carlo, second with the 1982 Tour de Corse and third with the Tour de Corse again and the Maxi version in 1985 all achieved by Jean “Jeannot” Ragnotti. There was a fourth one on the 1986 Portugal Rally but well, due to the circumstances, I don’t think it was a triumph….

But anyway, that was only for the World Rally Championship, the Renault 5 Turbo in all version, won more than 15 national rally championships accros Europe as well as many many many single victory… A little bomb !

Less known is that it was also campaigned in circuit racing through the Renault 5 Turbo Europa Cup, Super Production and the dedicated version in France taking the tittle with Erik Comas. In America as well where an IMSA GTU version was raced through the Renault/AMC alliance and a “Le Car” was also used as official pace-car for the Indy Car series and based on the Turbo 2. But well, these are other stories…

That’s all for now. Part 3 ? Well, yeah and that will detail a very desirable car, one of the first proper and works version, what else ?! Well it’s actually for sale..!

The 1981 Monte-Carlo winning car with Ragnotti and Andrié. 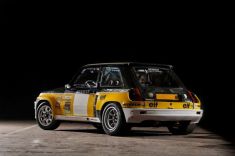 The Cévennes Type or 1981 version of the R5 Turbo.

Inside the Cévennes factory car.

A rusty Cévennes engine in situ. 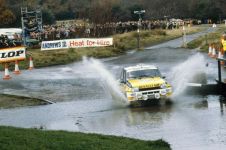 Ragnotti during the 1981 RAC Lombard Rally. 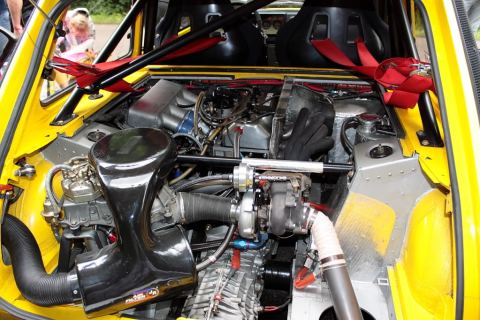 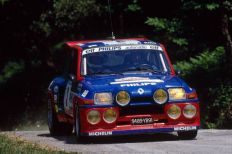 Inside the R5 “Maxi” Turbo.

The “LeCar” Indy Car series official pace-car based on a R5 Turbo 2.

Didier Auriol and the R5 “Maxi” Turbo in action.