2016 and 60 years ago, the Canadian-American Challenge Cup also known simply as the Can-Am started and rumbled around the North-American circuits during the Player’s event at Mont-Tremblant St Jovite in Québec, Canada. After 71 races, it died before the end of its ninth season in 1974 but it was all about power and speed and that is probably why it stands as the wildest ever championship ever made.

Not only did Formula One drivers raced regularly in the championship but they also bettered their best lap times achieved in what was then and still is considered as the peak of motor sport, Formula One when visiting the same circuits. It lasted nine years, during which only five makes of cars ever won a race with a power range starting from 500 and going over the 1000 horsepower when the almighty Porsche 917/30 killed it. Drivers were proper ones with Bruce McLaren, Denny Hulme, Mark Donohue, Peter Revson, Parnelli Jones and also Formula One regulars such as Jackie Oliver, Jackie Oliver and even François Cevert to name a few.

The Can-Am championship took its roots from the USRRC championship which up to the end of 1965 was the precursor of what would become the wildest championship ever. To everyone, Can-Am stands for unlimited and an almost non-regulated championship but in situ, it was codified. The Sports Car Club of America known as the SCCA drawn up the championship and the cars, technically, these would be recognized and codified as Group 7 by the FIA and would also be used in Europe through the Interserie. 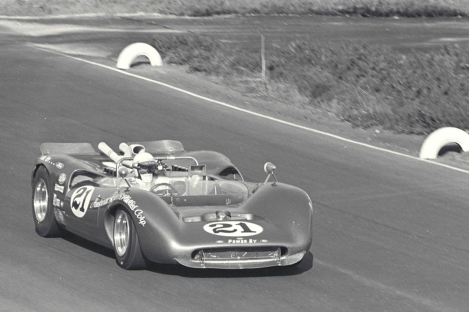 Parnelli Jones and the Lola T70 powered by a Ford Indy DOHC engine. 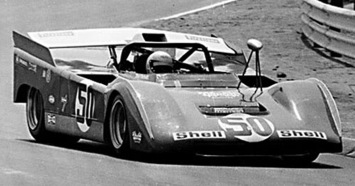 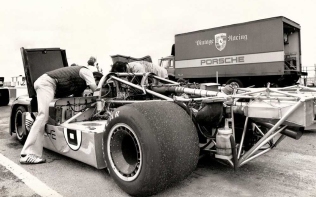 In situ, the cars would have to be open Sports Cars with a space for a passenger alongside the driver and the wheels being covered by the bodywork of the car and that was about it truly. Apart from the shape, it can be said that the rest was free even if certain safety features had to be respected. Gas turbines were also banned but that was it from the beginning. Of course, things would evolve as with all regulations. Oh yes, there was one limit and that’s pretty funny, the engine displacement had to be of a certain minimum, yes a minimum of 2500cc. That defines the spirit of the championship in my opinion.

Can-Am was great as accros all entered cars and from the beginning, everything was tried to achieve better speed. As said and as the story will tell when I’ll focus on certain cars, limitations came in through the years but well, very wild things were experimented with aerodynamics such as active or driver-controlled wings, ground-effect was pretty much mastered in Can-Am. Tyres were also developed and tailored made so certain shape and cars could be built. And finally, engines were probably the wildest things ever to sit behind a driver with V8s going up to more than 8000cc or being tryed with turbocharging and compressors on as well as the Europeans trying their own stuff as with Ferrari bringing in a 7000cc V12 and Porsche of course when they introduced and mastered turbocharged engines by racing in the championship..!

Yeah, Can-Am, the unlimited, raw and most brutal championship ever organised and probably that will be our focus this year as we will try to get a sample of the most distinctive cars and drivers combination that ever raced back then. All in all, it stands as today’s engineers dream, a championship where you could try anything and just imagine what it would be today..!