Talladega again but this time with well known Swedish car manufacturer, Saab. An unknown fact about Saab is that these cars were raced as much as from the creation of the manufacturer or brand back in 1947. They were very good cars and triumphed in rallying mostly with wins at the RAC Rally, Monte Carlo or Tulip Rally when these were no easy short-stage events but proper rallies as I like to say. They also took numerous titles in their domestic rally championship, the Swedish one, of course !

Whatever, and back to Saab, Talladega and America, the Swedish manufacturer headed West to prove their products and the durability of them. With completely “stock” cars selected randomly on their production line and by setting up the so-called “Saab Turbo in the Long Run” project back in 1986, they succeeded in proving it and by smashing a cumulative 63 international and world speed records. And here is the whole story of that project.

It all started with the FISA, the sporting body of the FIA back then and three of the 1987 spec Saab 9000 Turbo 16s being rolled out of the assembly line back in Sweden for inspection and sealing of their engines and five-speed manual gearboxes. The Saab 9000 Turbo 16s wasn’t that sexy sports car but a random five-door sedan equipped with a four-cylinder, 2000cc, 16-valves turbocharged and intercooled engine.

The rest of the car was also random except that these particular three cars received an additional roll cage and drivers’ six point harnesses. Oh, and they were also driven a 1000km back in Sweden and still under supervision of the FISA in order to get them warmed-up for the challenge, that “Long Run”.

On the 7th of October 1986, the cars were air-shipped to the West and the USA with 81kg of spares for each car and which would basically be the only spares allowed for the cars to be fixed on site if they would face any sort of problem.

But what about that “Long Run”, what was that all about and why would the manufacturer tackle America’s fastest superspeedway with “stock” cars ?! Well, as said earlier, it was all about that particular challenge, something that would prove how tough and reliable the cars were and for that, the manufacturer would set-up a unique challenge of running the three cars at an average speed of 220 km/h for a duration of 20 days and nights !

The Talladega superspeedway was chosen for that. It was an homologated track by the FISA and one of the few where the 220 km/h speed could be maintained consistantly without any throttle adjustment by the driver and also, it was capable of supporting speeds up to 350 km/h without problems. Now, why October ? Because it was all about getting the driest conditions possible and statistically, it was the best month for that even if, it didn’t work out well in situ.

All in all, it was a great project on the paper and they did receive support from their contracted suppliers such as Pirelli which provided about 400 OEM P600 tyres, Garrett Turbochargers who was linked to the manufacturer since 1976 and also Shell Gasoline which provided around 100 320 litres of fuel and oil in order to feed the cars.

So now, what about that crazy project on track ? Well from day one and arrival of the cars, the 25 drivers which comprised race and test drivers of the manufacturer as well as some engineers took the track and took turns behind the wheel. The challenge was started ! They would settle to refuel the cars every 50 laps and achieve driver stints of more or less 2 hours. For the tyres, the front ones would be changed every 12 hours and the rear ones swapped every 24 hours in order to respect the 20000 km normal specified service intervals. Also, an oil filter and spark plugs change would be achieved during these stops in less then 2 minutes and 18 seconds by the Saab pit crew. 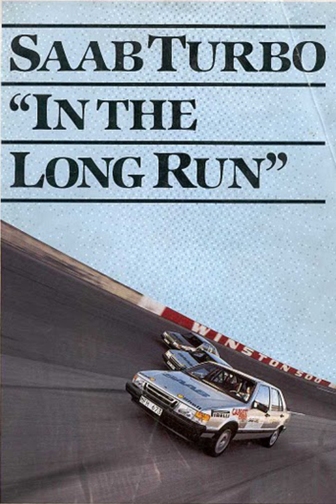 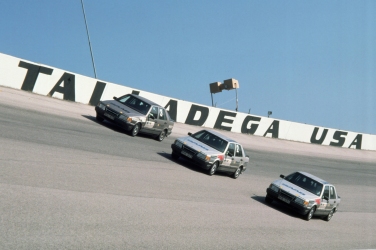 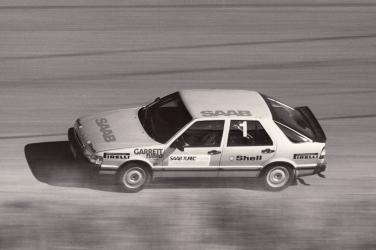 All records of “The Long Run”.

All records of “The Long Run”.

With an average speed of 220 km/h, they would cover an average distance of 5000km a day with the pit-stops included and that worked pretty well in their record attempt. But this was put into jeopardy by the weather conditions as hard rain hit the track and slowed that average speed. Also, another trouble was set by the nature of the track as after one day of running the challenge, it was found that the engine was being starved of fuel when the level became low just before each refueling stop. Sufficient allowance had not been made for the steep banking, which ‘shifted’ the fuel to one side of the tank. In consequence, the fuel pump then drew in air, causing one exhaust valve to burn on each of the three test cars after 15 days.

The quickest way to remedy the fault was to replace the entire cylinder head and the fuel pump with the spare carried in each car. In fear that pieces of the damaged valve may have damaged the turbine blades, the turbochargers were also replaced. A check at the end of the test revealed that the T3 turbochargers were virtually in perfect condition, so the replacement was unnecessary.

As a precautionary move, they cut the number of laps between refueling to 45 to leave more gas in the tanks, and two of the three cars were treated to new front brake pads because of wear from the hourly pit stops from 130 km/h to a standstill within 275 meters. NASCAR officials were on hand at all times to count and time the laps and monitor the work in the pits, and it was their detailed reports, filed to FISA officials in Paris, that became ratified for the record books.

All three 9000 Turbo 16s passed that mark in 21 days, the lead car breaking 21 international and two world speed records in the process. On the event’s last day, a select group of journalists were invited to participate in a few non-critical driving sessions; this concept would be expanded greatly in the future.

That was a hell of a crazy project but in the end, they did succeed in doing it and well, you couldn’t prove that “Crazy-Swede” team wrong on reliability and endurance with such results ! Funny is that they started again in 1996 but this time with Saab 900 and in a different way but still Saab had beaten 11 of their old records and set 22 new ones again !

If anyone is about to set-up something like that today, let me know, I’ll come, drive, assist or whatever !

One thought on “#TouringCarMadness – Saab Turbo The Long Run.”