Recent holidays and visit to a sunny island called Ibiza visiting one of my best friend and of course, a petrolhead like me brought up some Nascar content. Yeah, well, I like Nascar ! People in Europe and certainly because our culture is all about road racing mainly, do not understand Nascar and how good it is, cars are basically all the same, they go round a oval like a train but they do not get the science of the thing, that’s not the right picture…

A recent discussion with a friend about cycling brought this comparison up to mind, if you’ve tryed road cycling, fine. Then try to master the velodrome and the so-called “inch-racing” as well as the slipstreaming and banking. Interesting, it’s nothing like normal cycling so imagine doing so in a car at well above 200mph average speed..!

Nascar is much more than oval racing, and I recommend that you find a book called, Racing To Win, Wood Brothers Style by Lyle Kenyon Engel and published by ARCO Publishing New York. Might be hard to find as it’s old but I was lucky enough to be offered a copy by Tony when on holidays and all in all, I thought it would be good to introduce their story.

The Wood Brothers Racing was formed in 1950 by Glen and Leonard Wood and nowadays stands for the longest active Nascar team with 64 and soon to be 65 years of active racing as they officially and first entered the Nascar series in 1960. They are known as the famous #21 car in the field and are remembered for their famous red and white livery.

Back in 1950s, the Wood Brothers, Glen and Leonard from the Blue Ridge Mountains and the city of Stuart in Southwest Virginia, formed a family operation, a family team let’s say as there were in reality 5 brothers, Glen and Leonard but also Delano, Clay and Ray Lee. Altogether, they formed a stock car team on their time aside their work duties and each of them served as a mechanic. They were no drivers, only ran the car they had prepared but in a way, they ended up doing so, at least at the beginning with Glen taking up the duties as no one wanted to drive their car. This would change as Chris Williams would be their first driver and part-team owner. Soon, the team and driver combination would earn success and win races at Bowman Gray Stadium in Winston-Salem, North Carolina as well as at the Martinsville Speedway in Virginia.

Basically, the Wood Brothers team went, in its early years, from a weekender and amateur team to a full-time business. Glen and Leonard being the two full-time members and the other brothers as well as local friends from their hometown joining at night and for the weekends in their Stuart, Virginia, workshop.

They would join the Nascar in 1960 and adopt their famous number #21 and become real and so-called stock car racing professionals from then. Their number would become one of the famous one such as the Richard Petty #43 and Dale “The Intimidator” Earnhardt #3. And what proved to be their “unfair advantage” was their mechanical genius, racing science as well as Leonard Wood’s talent in engine building.

Interesting was their ability for innovation, one of the best remembered one was the invention of the so-called modern pit stop. Early years of motor racing proved that pit stops were far from professional, drivers’ pulling into the pits, stopping their engines and even getting out of the car to enjoy a cigarette while the crew would service the car and fuel it when needed. The Wood Brothers were the first to master the procedure by thinking that in reducing the off-track time, they could increase and better their position on track. They created and “packaged” the whole procedure with dedicated equipment and that was soon to be copied by all the other teams in the category as well as in other championships and countries. All in all, a sort of “mechanical ballet” looking like a dance but being the most effective way to do so.

The biggest testimony to that was the 1965 Indianapolis 500, part of the Ford Motor Company assault on all categories in motor racing, Colin Chapman was brought along to master the car engineering while Ford would power the car but funny is that part of Ford requirement for the race was to be the use of the Wood Brothers team as the official pit stop crew. Colin probably wasn’t happy but who else could help the team master this requirement ?! The Wood Brothers. And it certainly helped Lotus and Ford as well as Jimmy Clark to win that year Indy 500.

I’ll leave it to you to discover the whole story as it’s a great book and a great story, still a family-run team today in the 2015 Nascar Sprint Cup and having achieved a total of 98 wins since 1960, it proves that with a great recipe, you can do well and stand strong. Long live the Wood Brothers and their #21 number ! 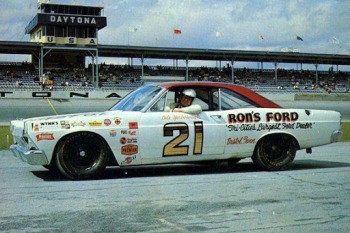 The book, probably an original copy.

The book can be found on Amazon – here.