Not the best season of the ETCC Ford Vs. BMW battle but one that was achieved on the same grounds with both manufacturers having raised their game to the same level. Ford had introduced the new Capri RS3100 and its new 24-valves engine design as well as BMW raising its own game to maintain its own edge on the competition. Competition was fierce and it would turn out to be a whole Ford domination in the end with the Zakspeed and Ford backed team taking the overall manufacturer title for Ford with the Escort !

The 1974 European Touring Car Championship season consisted of 6 rounds but even with Ford and BMW both having taken their package to the best possible state of rule interpretation and both cars sporting 24-valves head and aerodynamic package, the oil crisis was starting to hit the championship pretty hard.

Ford, BMW and even Alfa Romeo missed out on the first Italian round at Monza, the Monza 4 Hours as Ford didn’t have its new engine ready by then and BMW had reduced its works program that year. Both Division 2 manufacturers left it to privateers for the first round. Funny was that Hezemans a Ford works driver was there in the Dutch ex-works Capri 2600RS of Akersloot as well as some guys from Ford but only to enjoy the charms of Italy of course. However, it was a no surprise finish with 4 BMW 3.0 CSL taking the first four spots in the general classification, the Capri retiring on a wheel bearing failure and the best Ford being the works backed Zakspeed Castrol-RTL team taking the fifth position overall with Hans Heyer and Hartmut Kautz.

Then came the second Austrian round at the Salzburgring with the Austria-Trophäe Salzburgring and here was the Ford Vs. BMW war to officially begin. Ford was introducing its new Cologne baby with a two car effort and BMW came up with a sole works entry and latest evolution of the CSL which sported the new M49 24-valves engine as well as reworked rear wheel arches now sporting naca ducts in order to enhance the cooling as well. Unfortunately, the works CSL driven by H-J Stuck and Jacky Ickx was at the top of its own game during the whole weekend taking pole position and securing a first place finish alongside two privateer entries and making it a full BMW podium as in Monza while the Ford opposition both had to retire on engine problems. Again, Zakspeed and their Escort were the best Ford in Division 1 securing a win in the class again and a fourth place finish.

The Cologne GA Capri of Mass and Lauda at speed.

The mean looking Chevy Camaro Z28 of Gardner and Muir at speed.

Hezemans and Glemser leading the sister car of Mass and Lauda before both retired.

And the Winners are Hans Stuck and Jacky Ickx in the mighty 3.0 CSL.

The third and again Italian round but this time in Vallelunga with the Vallelunga 500KM was not to be a repeat of the Salzburgring manufacturers effort, both Ford and BMW preferring to compete in the Nürburgring 1000KM on that weekend even if Championship points would go away. Ford did however back an entry in Division 2 with the Ludwig/Odenthal 1973 Capri RS2600 while BMW had their usual Précision Liegeoise, Faltz-Alpina, Jolly Club and Schnitzer CSLs there. It turned out to be in favour of BMW again with the Precision Liegeoise and Jolly Club cars taking the two first spots while third place overall was for the Division 1 Zakspeed Ford Escort and fourth place overall for the Ludwig/Odenthal car.

Back to the Nürburgring, Ford won the touring car battle there with the Hezemans/Glemser car taking the first place in the category but a long way behind the new Porsche Turbo Carreras of course.

Fourth round was to be in Germany and Nürburgring or Nordschleife again with the Grosser Preis der Tourenwagen . This was to be the most important race of the ETCC Championship for both Ford and BMW and both had already practiced there during the earlier 1000KM and both were “all out” to triumph there.

The 6 hour race was a battle of heroic proportions with Lauda/Mass and Toine Hezemans/Dieter Glemser driving for Ford. Ronnie Peterson/Hans Stuck and Derek Bell/Jacky Ickx teaming up for BMW. During the race, the BMWs took an early lead but Stuck’s car soon broke its gearbox after an accident, putting one BMW out. Mass soon followed Stuck to the pits and this left the second Capri with an almost unbeatable lead. But it wasn’t going to be that easy. The Capri was sidelined with a differential failure and the second BMW moved into the lead. After 28 minutes in the pits, the Glemser/Hezemans car was back on the track and chasing the leading BMW. Then, on the final lap, the BMW was rammed by a Zakspeed Escort and it was out of the race. Ironically, a second Zakspeed Escort took over the lead, eventually winning the race overall and in Division 1 with the one surviving Capri taking second place and Division 2 honors.

Early stage of the race with BMW leading the Ford. 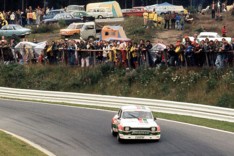 The Hans Heyer and Klaus Ludwig OA. Winning Zakspeed Escort after the Division 2 debacle of both BMW and Ford.

Following on the Nürburgring round came the Dutch Zandvoort Trophy and fifth round of the season. Very unfortunate was that BMW had decided to withdraw its own works effort and sort of left the Championship to Ford. Privateers were still there to defend BMWs honors but clearly, it had by then become a one-horse Championship. Ford Cologne sent a two cars effort and BMW had 8 privateers to try and counter-balance the Championship with the usual Précision Liegeoise, Faltz-Alpina, Jolly Club, Schnitzer, Brun Motorsport and Dutch National Racing Team CSLs but ford took the overall win followed by the local Dutch, Huub Vermeulen and Rob Slotemaker followed by Brun Motorsport, Peter Arm and Cox Kocher Swiss pairing in  privateer CSLs. The Division 1 going once again to the Zakspeed works backed Escort RS1600 of Hans Heyer and Klaus Ludwig.

Chassis #19997 or the Winning Zandvoort Trophy car in the hands of Mass and Stommelen.

The Hans Heyer and Klaus Ludwig Zakspeed Escort at speed.

The Peltier and Chastaing 3.0 CSL at speed.

And came the final round in Spain with the Jarama 4 Hours which proved the lowest point of the whole Championship with only 13 starters and 9 finishers. The Manufacturers’ Championship was already settled but Ford sent one car with Hans Heyer, Klaus Ludwig and Toine Hezemans at the wheel. Heyer, normally a Division 1 driver for Zakspeed took a seat in the Division 2 Cologne Capri while also entered in the Escort in order to fight for the Drivers’ Championship against Peltier and the Précision Liegeoise BMW 3.0 CSL which was the sole BMW present in the class. Heyer would by doing so only have to pick which car to drive should one be better placed than the other. Hezemans partnered regular Mohr in the Zakspeed Escort as part of the trick and Mohr being unwell that weekend, it was quite fortunate. In the end, the Cologne Capri took an easy win and was followed by the Zakspeed Escort in second place, both Fords taking Division 2 and 1 respectively while Peltier and Lafosse took third place with their CSL.

In the end, it was quite a troublesome start of the season for Ford and their new car not being entirely perfect straight out of the box but it ended being a success even if it was the Ford backed Zakspeed Escorts effort that took the Manufacturer Championship in front of the Cologne works effort. BMW could have achieved better but unfortunately and from the beginning, they kept the newly introduced engine evolution for the works team only which left the privateers with no hope to battle against the Cologne built Capris. Would it have been different if they had spread and supported others during the year ? Well, 1975 saw Ford scrapping its Group 2 effort due to the oil crisis hitting hard on manufacturers and BMW only supplied parts in ETCC for 1975 with no real competition to fight against.