1994, and the Germans were not happy after the Italians and Alfa Corse took all the laurels during the 1993 season. However, there was no time for them to rest..!

Yeah, 1993 had been a transition, the Germans had only updated their previous Mercedes 190E with the Evo II for that year but 1994 would prove different as they were to introduce their new C-Class or W202 model – detailed here – and yeah, this would prove the game changer.

Alfa Corse focused on improving the 155 V6 Ti and making full use of the rules through interpretation. The first thoughts went into the general architecture and construction of the car by lowering the body height and improving aerodynamic efficiency. All that was achieved through the clever use of the rule.

As said in the previous article – here, the aerodynamics were essentially free under the centre of the wheel hub, therefore, the whole car was lowered, including the floor of the car in order to reduce the cross section are and height of the centre of gravity.

On aerodynamics, the focus would be on underfloor. Flat-bottom were permitted both front and rear, up to the wheel axles, rear wing could not exceed the front view profile and length of the car. All this permitted Alfa Corse to add an additional wing under the boot and make full use of existing but further developed floors and rear wing.

The engine was also new, the architecture would be retained but engine block and crankshaft were new. Valve train was transferred at the back of it on the flywheel side, a new inlet system was fitted with pneumatic valves and it also proved more compact and lighter with 7kg gained compared to the 1993 unit. All this helping the engine to be pushed a little more back and lowered in the car.

On the electronics, big improvements were made with ABS being developped with the help from Kelsey Hayes, Brembo and Techniques d’Avant Garde (TAG). It was a very complicated device to add to the existing 4WD transmission and data-logging as well as electronic management would be required in order to make all existing electronics such as the Magneti-Marelli ECU, heated screens, blowers work together.

Active suspension was also being worked on as the TAG data-logger was derived from the McLaren MP4/8 Formula One car unit and that therefore, it was ready to be put in use for such purpose. But that proved more of a “work in progress” that would come through the year. The cars had been built to be equipped with all required active suspension struts but it was more about the software meeting the requirements and it proved the same for the ABS in a way even if for the later, this was introduced from the beginning of the season.

All in all, it looked a very good but complicated package. Alfa Corse had been said to be bringing the most sophisticated racing car to the track for 1994. In a way, it was true as the FIA had stripped Formula One of most driving-aids… 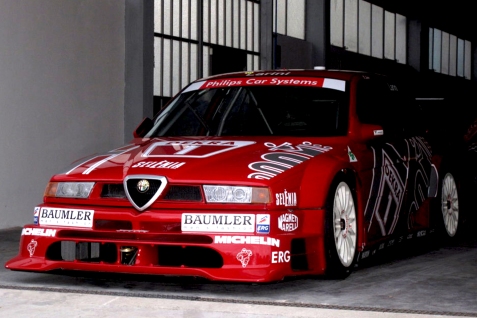 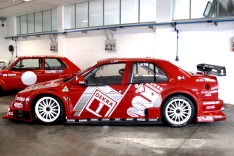 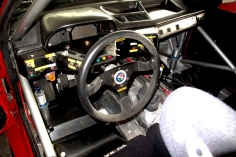 Initial testing proved good with the 1994 car lapping Jerez 1.5 second faster than the previous year model but once the whole field gathered for the first general test at Zolder, the margin proved to be only of 0.3 seconds over the new Mercedes and good old Klaus Ludwig. Opel and the Calibra had joined the game as well and even though not yet up to speed, they had the base for the to-be best aerodynamic package. 1994 would prove a different story let’s say..!

And it was to be a different story for sure. The permanent line-up for 1994 would be the following:

With additional entries fielded through the year or as stand alone entries by:

The 1994 DTM Championship would consist of 12 Competitions consisting of 20 races of which two were non-Championship races at the Mugello Circuit, Italy and Donington Park in the UK. First Round was held in Zolder, Belgium and the Italians secured the first two rows after qualifying, a perfect day from the start with Larini making it a 1993 look alike. In the Race, it would proved different, Nannini taking two wins and Larini retiring with electrical woes from Race 1 and securing a 8th place finish in the second one after starting from the back. All in all, a good start, pole, both fastest laps and wins went to Alfa. 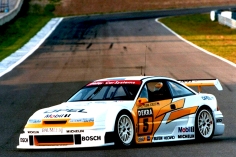 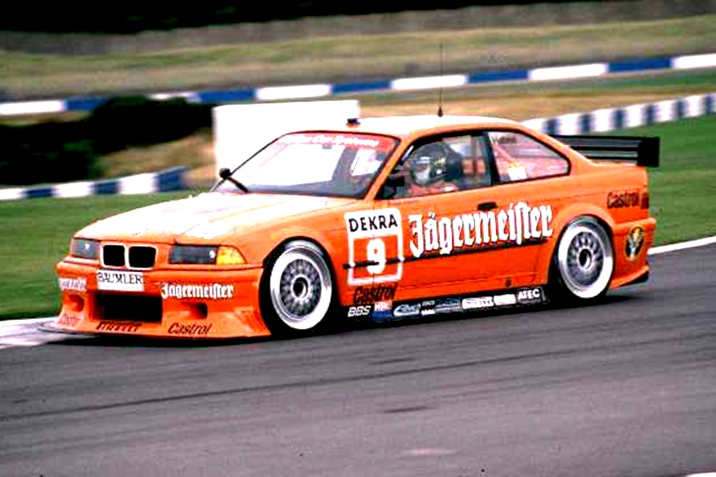 The privately built – Lindner – BMW E36, not really up to speed and without works backing.

Second Round in Hockenheim would prove to be a Mercedes weekend of course as they were home. Pole, both fastest laps and win in Race 1 went to the Germans with Nannini taking the second win with a 0.21 second advantage over second Kurt Thiim and his Mercedes. A mixed weekend as Larini didn’t start at all due to fuel pressure woes this time. The Opels were also starting to get up to speed with Keke Rosberg securing a third place finish in Race 2. There was now a third horse joining the battle.

Third Round which was scheduled on the Green Hell or Nordschleife originally was cancelled due to the Imola Formula One “effect” and ran on the modern Grand Prix loop. The Germans being home again, Bernd Schneider took pole and Ludwig the fastest lap in Race 1 while Larini took the overall honors. However, round two would prove the opposite with Ludwig taking the win and Larini the fastest lap. Mercedes was clearly a match for the 155 and times were getting harder. The meeting had been run in torrential rain and 4WD was no advantage over the 2WD Mercedes…

Fourth Round or let’s say the “DTM on tour” as these were not true Championship rounds was to be held at the Mugello Circuit in Italy. A record crowd attended the event only to witness the Germans taking all honors during that weekend with Kurt Thiim and Jörg van Ommen taking the two wins for Mercedes, as well as Thimm securing pole position and a fastest lap in Race 2 and only for Nannini to achieve a fastest lap in Race 1.

Fifth Round, back at the Nürburgring again, Nannini secured a win in Race 1 but it proved a German domination with Mercedes taking pole position, fastest laps and a Race 2 win. By then, Nannini was leading the Championship with 102 points and followed by Ludwig with 89 points. By then Kelsey Hayes and its representative in charge of the development with TAG for the active suspension was adamant that the system was ready but Alfa Corse was still reluctant as it thought it was on the verge to be banned. Other development were being explored with power braking in order to assist the ABS system efficiency, a whole lot of work in progress it was or a way to keep up with Mercedes let’s say.

By then, a new regulation came up and the Italians had been right, technology would be frozen from mid-june onwards with active suspension being banned from 1995 and engines to be limited to 12000 RPM. Although, ABS and traction control would remain an option.

Sixth Round was held at the Norisring in Nuremberg. A record crowd of 130000 spectators attended and after the previous weekend, the Italians wanted to defeat the Germans and there was no better place than the ex-Nazi arena for that. Although Bernd Schneider secured pole position, Larini took both fastest laps and a win in Race 1 with Kris Nissen taking the second one. The Third Reich was not to happen!

Seventh Round, again with the “DTM on tour” and at Donington Park this time but nothing really mattered there even if Alfa Corse and Nannini took a win and a possible second, only to fail and park after the finish line with fuel too low to comply with the post-Race scrutineering. As this was a non-Championship round, it didn’t really matter… Still, Manuel Reuter and Opel took their first win there as a result of the disqualification of the Alfa.

Ninth Round and Nürburgring again, it would prove a Mercedes weekend again… Jörg van Ommen securing pole and two wins while fastest laps went for Thiim in Race 1 and Schneider in Race 2. The Alfa droping out from the beginning after both went off even if Nannini secured a fifth place finish in Race 2, it was slipping away from the Italians clearly and the Germans were taking off.

Tenth Round at the AVUS in Berlin was to be a German one or at least that is how the Italians saw it. However, Alfa Corse had brought young gun in, Stefano Modena in order to jeopardise the Mercedes effort and help strengthen the team and Championship quest. Thiim and Ludwig were in the mood for that effort and secured the first line but Stefano Modena proved to be the man on a mission that day, securing both Race 1 and 2 win. Alfa and the Italians were delighted even if Nannini didn’t take the good points for the Championship… They had made their point to the Germans. All in all, this showed how high the level was in the Championship by this time.

Eleventh Round at the Alemannenring in Singen, Larini took the honors securing both win and a fastest lap while Modena took pole position. Opel was showing some good signs again achieving a fastest lap in Race 2 with Manuel Reuter but nothing more yet.

Twelfth Round back in Hockenheim and the long straights… A circuit suited to the Mercedes and Alfa was by then only just leading the Manufacturers’ Championship… 92000 spectators were there to witness the peak of the Championship and title decider. Straight from the beginning, Ludwig posted times as much as 2 seconds faster than Nannini and this would just prove the performance trend over the weekend.

The Alfa could not place higher than sixth in Race 1 and the only joy would come from Michael Bartels, a regular in the Jägermeister Schübel Engineering team who had been dragged in the 1994 spec car of Francia for that particular round, ending third in the Race 2.

All in all, Mercedes and good old Klaus Ludwig took both Drivers’ and Manufacturers’ Championship with Jörg van Ommen in second place only for Larini and Nannini to take third and fourth respectively. 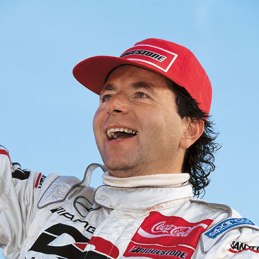 And the Winner is, Klaus Ludwig. 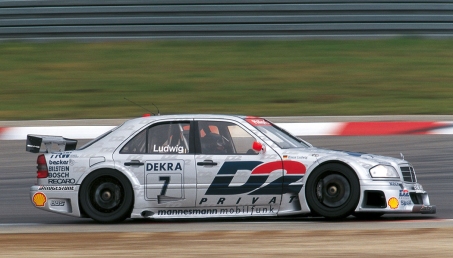 And the Winner is, Klaus Ludwig.

Not a complete “Third Reich” still as in the statistics, Alfa Romeo had won more races than the Germans in 1994 with 11 wins, not counting the “DTM on tour” events. But yeah, that wasn’t enough and the Italians went home, the Germans had made a good development and full use of the rules while witnessing the 1993 Italian domination, that’s all… 1995 maybe and more in the next episode.