Not the usual bit of touring car here, not the usual motorsport sedan either even if might just look like an Alfa Romeo on steroids. No, the Alfa Romeo 155 V6 Ti is something quite exceptional in terms of development, technology and which showcased to what  extent a manufacturer was ready to take its own technology in order to tackle and compete against its counterparts.

Back in those days, and we are here talking of 1992-1993 to begin with, the FIA was to introduce de FIA Class 1 Touring Cars regulations alongside the Class 2 which would for the later become the well-known so-called Super Tourers. On Class 1, it was all about freedom.

Talking about engine first,the basic unit would basically have to be production derived, with cylinder centrelines, original vee-angle and construction material having to be as per the original one. These were in terms of architecture limited to 6 cylinders as well as the capacity capped at 2500cc but all the rest remained free except for the whole unit being rev-limited at 12500RPM.

On the architecture of the car, the ruling permitted the fitment of 4-wheel drive transmissions or let’s say that a front wheel drive car could be converted to it with the transmission therefore being free although the gearbox position would have to be kept in the same half of the car as for the original production model. This was put together in order to attract manufacturers, like Alfa, that had been using FWD as a sort of trademark and as you see, it worked.

On aerodynamics, basically, the cars could be made wider than the original production model through the use of wheel arches extension and everything below the axle centreline was basically free. Also, electronics were to play a big part in those cars and developments with traction control, differential control and of course, ABS systems.

The package sounded good enough for Alfa Romeo to build a “Über Alles” 155 V6 Ti and commit to a full effort in the German DTM series for 1993. Of course, they had been involved in the framing of the ruling and in a way, this would become a way for Alfa Romeo to prove itself in one of the best and most regarded national touring car championship in the world.But do not forget that in those years, touring car racing was probably the only category that draw crowds as big as in Grand Prix racing with high television audience and history proves that it produced some of the best racing ever seen, with almost all drivers coming from Formula 1 or being on the verge of making it and yeah, it was brutal and what I like to call, the proper #TouringCarMadness era.

Back to the Alfa Romeo and the 155, they started from a clean sheet of paper, their experience at the top level of motorsport with Formula One, both as a manufacturer and motorist and in touring cars with numerous victories and success through the Alfa Romeo Giulia Sprint GTA, the GTV6 or some crazy project such as the stillborn Alfa Romeo 164 Procar showed that the skills were there and that Alfa would clearly be up to speed with that project.From the early development, the packaging or let’s say architecture of the car would play an important part as how the whole car would be framed. The 4-wheel drive transmission was a key factor in this with the balance of the car being crucial in order for it to deliver on track and achieve consistency. Therefore, the gearbox would have to stick to its original location as per the FIA Class 1 rules, but Alfa tried to ensure that all the weight would be fitted as far back as possible.

The engine was lowered as much as possible and this had been possible due to the design by Pino d’Agostino which proved very compact while featuring dry sumping and injection by Weber Marelli and which permitted its location right in front of the front axle centre line, keeping in mind the front differential housing location.

The gearbox was designed as an F1 transmission look alike in terms of packaging with the engine oil tank and central differential as an integral part which all in all permitted this to occupy the middle of the car and achieve the required balance. And transmission was to be a key in how the car would behave on track, it proved a hell lot of development during the 1993 season. The first version used a traditional H-gate for selection and would later evolve in a sequential unit. On differentials and as this was key to putting the power down, front and rear axles used a ZF plate-type limited-slip differential unit with the central one being a Ferguson Developments viscous coupling type.

Also added was a particular DTM feature and it was the requirement of catalytic converters which required a specific system with two converters per bank of cylinders and the well known rear pipes upward-facing exhaust pipe outlets also mandated in order to comply with the championship noise limitation ruling.

On suspensions, the front and rear of the car sported tubular subframes in order to add lower suspension arms. The original rules permitted the use of any suspension available in the current manufacturer range and the one chosen was picked up from the 164 model which had McPherson struts both front and rear with Bilstein/HighTech dampers. Steering was achieved through a special and electrically assisted TRW unit.

Brakes were actually what looked like the most simple thing on the car with ventilated and cast-iron discs using four-pot calipers all round. No ABS was fitted as this would be achieved through the central differential unit.All in all, a great package but the judge would be the track and racing of course. Alfa Corse would join the 1993 Deutsche Tourenwagen Meisterchaft in its 10th season, the first one to use the FIA Class 1 ruling for Touring Cars and they didn’t take it easy. A heavy program of development was followed by heavy winter testing. 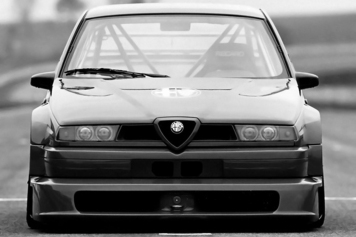 The drivers of the Alfa Corse cars would be Alessandro Nannini and Nicola Larini, backed-up by the Schübel Engineering cars of Christian Danner and Giorgio Francia as well as two privateer  entries in Class 2 – Super Touring – with Gianni Giudici and the so-called Scuderia Giudici as well as Franz Engstler and his Engstler Motorsport entry which would drive the Alfa Romeo 155 TS.

It wasn’t a bad line-up with all drivers except for the privateers, having had their chance into Formula One or actually still being active at the time with Larini being the Scuderia Ferrari test driver by then and yeah, let’s say that they faired pretty well for a start.

1993, Larini and Nannini leading the field at Zolder and setting the trend for what would prove a dominant campaign for Alfa Corse.

Larini flying at the Nordschleife.

1993, Larini leading at the start of the Alemannenring round. 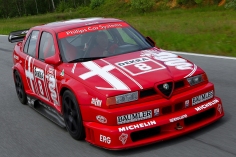 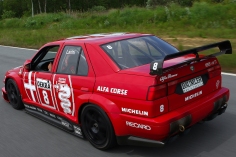 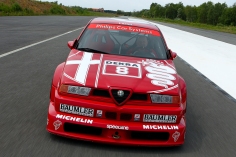 Nicola Larini would go on and secure a dominant title that year, pretty much setting the trend during the first round which was held at Zolder, Belgium. Where he took pole position, fastest lap and two wins during a very wet weekend. This would go on all year with him winning 10 rounds and 11 if taking into account the non-championship round held at Donington Park, Great Britain. By achieiving this, Larini took the title for Alfa Corse ahead of Rolan Asch and Bernd Schneider. Also settling a record with the biggest number of wins recorded for a single driver that year and of course, beating Ze Germans on their own territory..!

They were not happy but as you can see below in the 1993 season review, this proved to be a spectacular year, the regulations played well and more was to come as Opel was to join from 1994 with the Calibra V6 and Mercedes-Benz was already working on something new to surprise the Italians. Oh yeah, it sounded good for the future..!