Back in 1988, Mercedes’ board gave the go-ahead for a new challenger to the forthcoming 3.5L World Sports Car Championship era to start from 1st of January 1991 and this would become known as the Mercedes-Benz C291.

Not only it was the first fully Mercedes branded sports car – post-1955 –  as opposed to the previously known Sauber-Mercedes but also, it saw the first ever 3.5L engine built and raced by the Stuttgart marque. Work started early in 1989 with around 15 concepts being put together for the appreciation of a group of 5 composed of Dr Hiereth, Gert Withalm, Willy Mueller and Sigurd Heinmuller from powertrain development as well as Leo Ress from Sauber, in charge of chassis, suspension and aerodynamics.

All solutions were considered with ultimate goals being a power output of 650hp, a weight set at the ruling minimum with 750kg, a certain length as well as an overall aerodynamic efficiency. Engines were particularly looked at with eight, ten and twelve cylinders architecture being explored.

It didn’t all go according to plan as the car started life overweight at around 790kg and with an engine underpowered with figures nearing the 530 to 540hp at the start. Still, the final choice had been a 180° flat-12 engine in order to achieve the lowest centre of gravity possible without any penalty concerning the aerodynamic efficiency. On weight, it was all about being tough or German-built let’s say with a glass windscreen being responsible of a 5kg ballast and same with gearbox as well as powertrain being built too strong as it would later be found out, but maybe that should have been kept!

Altogether, the C291 sported a number of new features compared to its predecessor the C11 and as admitted in period by Ress himself, starting from scratch as opposed to TWR and Jaguar at the time didn’t make life easier and certainly not with that engine. WSC or Group C having been a ground-effect era ever since their introduction, flat engine architecture sounded a particular concept.

Still, it featured a particular underfloor with a single full-width venturi tunnel taking full advantage of the maximum depth permitted by the rulebook with 28cm as opposed to the traditional double-sided solution that all other manufacturers were exploring at the time. This had been permitted by the engine and transmission design with a transverse gearbox taking its drive above the centre-point of the crankshaft. This meaning that the whole gearbox seated higher than the engine itself and altogether, this permitting the full use of the underfloor.

The C291 complete plan, note the angle of engine and gearbox assemby given in order to clear underfloor. 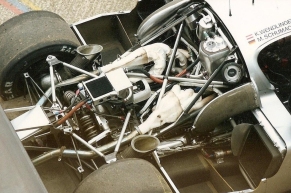 On the engine, as said, 3500cc and flat-12 architecture with 4-valves head and fuel injection running alongside the cylinder heads, injecting between the twin-plugs and four valve stems and the exhaust ports on top of each cylinder while monobloc construction would be used with welded cylinder heads. A solution that was part of the architecture choice as it permitted to achieve greater strength and higher thermal efficiency not available through normal vee architecture.

TAG Electronics, a McLaren subsidiary headed by Udo Zucker – said to be the father of the Motronic Bosch System – supplied the engine management system with a telemetric unit capable at the time of transmitting five million bits of information per second, enough to occupy 1500 telephone lines at one time. This comprised 16kg of measuring equipment at the time, just imagine the length of the loom!

Suspension side, front assembly consisted of outboard coilover damper unit and double wishbones at the front. This in order to help strength in terms of chassis construction as well as mandatory crash test but also in order to help mechanics with spring/dampers change as opposed to the previous inboard mounted C11 design. On the back, in order to keep the rear tunnel clear and unobstructed, the springs and dampers were located inboard, transversely on top of the gearbox with pushrod and levers actuation. Sachs supplying the effort for shocks while Brembo would supply the carbon brakes.

Chassis side, it featured a full composite material monocoque. Testimony to the strength of the design was how easily it passed the mandatory FISA crash test which involved loading the sledge to 900kg and running into a block at 56 km/h as well as a the integrated roll-over hoop located in the roof being subject to a 8.5 tonne crushing test in which it yelded just 2.6mm while regaining it original shape when load was removed.

Back to aerodynamics and while underfloor was already explained, the unusual feature of the C291 probably was the full-width aerofoil featured on the nose. This served the purpose of routing the air along the cockpit and to the engine cold air intake located each side behind the cockpit door openings. On the concept, it came from the windtunnel trial of a C11 nose which featured no radiator, the results were so good that Ress pursued the idea for its new car.

Overall, the C291 design allowed a better aerodynamic efficiency than two tunnels in terms of underfloor while effectiveness being defined by drag coefficient divided by downforce, efficiency factor was above the previous C11, already considered a very good car. In terms of torsional rigidity, Mercedes at the time stated that it was twice stiffer than the 1989 Sauber C9 model of 1989.

Now and considering on-track achievements, I would not say that the C291 ended-up a complete failure, truly it wasn’t but in comparison to the previous C9 and C11 models campaigned by the Sauber Mercedes outfit, it didn’t prove as successfull. Clearly, the fact that an old C11 would be campaigned alongside the new car did show how much confidence the team had in its new design…

C11 honors would be given to the “Senior Team” with Jean-Louis Schlesser and Jochen Mass to run the heavily ballasted C11 up to and including Le Mans – Which made a return to World Championship status – while the “Junior Team” composed of Karl Wendlinger and Michael Schumacher would be tasked to handle the new C291. Reliability and time ran out before the start of the season, hence the decision.

Suzuka, Japan was the start to the season on the 14th of April 1991 with Peugeot Talbot Sport taking the win with their Peugeot 905. It could have been a better showing for the Germans but unfortunately, Schumacher left the pit with a jammed and partially open fuel filler which caused fire to the car and retirement. Still, the C11 and Senior Team took C2 honors (Group C / Turbo Cat.) with a second place finish.

Second round with Monza, Italy on the 5th of May 1991 and this time Jaguar took the win with a dominant 1-2 finish with the XJR-14, followed again by the good old C11 and Senior Team. The C291 having retired on an engine failure this time. And it wasn’t to get any way better…

The C291 received an engine evolution with improved intake and injection system. Passing from four to twelve butterfly flap, this permitting to raise power output to 640hp @13200RPM. Then, weight was saved on engine, gearbox and chassis, lowering the total to the Championship minimum with 750kg. The package was now competitive on the paper but would it deliver? Nope, reliability went even more downhill.

Silverstone, Great Britain saw the car first podium with a second place finish but then, the C291 would not go to Le Mans as too weak to sustain the race and the old but strong C11 would be preferred. Still, it went wrong with two cars retiring on engine failures while the Wendlinger/Schumacher entry joined by Fritz Kreutzpointner would end-up fifth… It could have been a win if they had started the race as an endurance one and not a sprint… 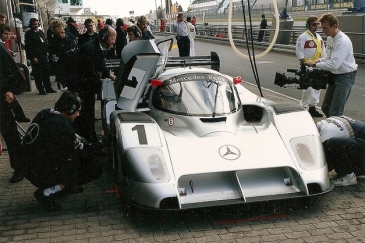 The C291 in the Nüburgring pits.

But anyway, from then, it just went downhill. Both C291s were retired from the Nürburgring and home race with a gearbox and engine failure but apparently the whole thing was going wrong with engine blocks being porous, cylinder walls being too thin and all sorts of problems arising following on the mid-year evolution, including shortage of good parts..!

Magny-Cours, France would see two retirements, Mexico as well although Schumacher did set the sportscar lap record. Autopolis, Japan being the last round, Mercedes seemed to have turned their fortunes around. The weekend started badly with a string of engine failures over the Friday and Saturday as well as on the Sunday morning warm-up session for the Schlesser/Mass entry but in the race, Schumacher/Wendlinger would go on to take the overall win while the sister car would finish in fifth position. Finally, it all looked good with the cars coming together, future and 1992 looking bright with a development already in progress with the C292 project. 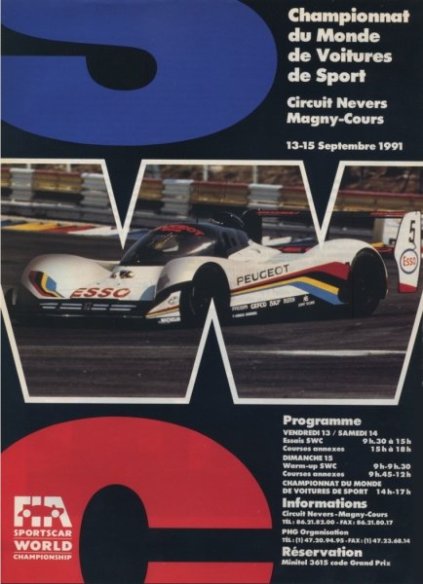 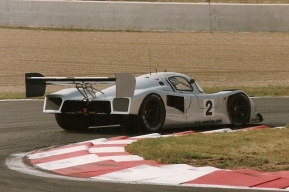 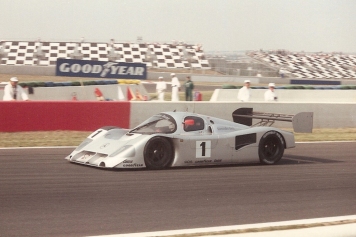 But all this would stand as a failure in the end, although a race winner, the C291 and future C292 were canned in favour of Mercedes-Benz going to Formula One from then. Max and Bernie had won, and who knows what it could have been if the Germans would have raced the French and Japanese in 1992… 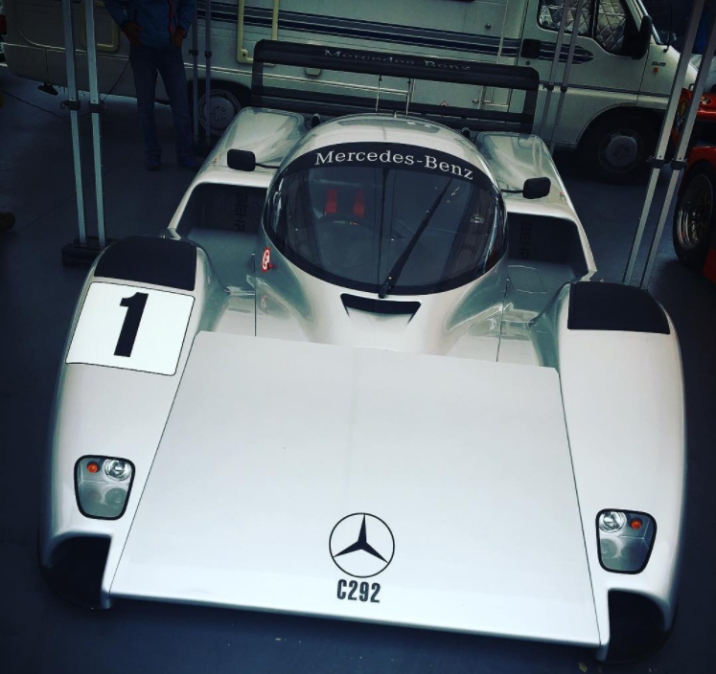