#TurbineTuesday today with a look at the turbine powered STP-Paxton Turbocar, the car that almost won the Indy 500 back in 1967 with Parnelli Jones at the wheel but which suffered a torque-converter failure with 3 laps to go…

It all started back in 1966, Ken Wallis had designed and developed a concept of a gas turbine powered race car. The project was presented to various big names of the time such as Dan Gurney and even Carroll Shelby, only for the concept to be turned down. But a clever Andy Granatelli, CEO of Scientifically Treated Petroleum or let’s say STP for the mainstream community, someone who wasn’t actually afraid of exploring new boundaries did express his interest for the concept and that is how it started.

Joe Granatelli, brother of Andy was to be the man responsible for making it happen with the help of Wallis and his crew. The project was handled at STP’s Paxton division in Santa Monica, California from January of that year.

On the design, Granatelli used the clever idea of the side-by-side concept, introduced by another speed merchant and well know in the Indy community, Smokey Yunick. The car would be composed of an aluminium monocoque backbone chassis with the turbine hanging on the left side and the driver hanging on the right with the addition of a Ferguson four-wheel drive transmission which was familiar to Granatelli’s previous entries if you remember or know about the Novi Ferguson. Other than that, the car sported double wishbones and inboard mounted suspension at the four corners as well as disc brakes all around and an aerodynamic brake located behind the driver.

Now talking of the power unit, a Pratt & Whitney ST6B-62 made by United Aircraft of Canada Ltd. gas turbine said to produce 550 “shaft horsepower” at 6200 rpm. All in all, it takes the exhaust gases of a jet engine and converts them to energy to drive a turbine wheel connected to an output shaft.

In situ and on the Turbocar the air enters the engine through a duct and goes through four stages of compression with fuel being injected and then ignited by a glow plug, the resulting combustion driving the output turbine and therefore output shaft which goes to a transmission box or torque-converter from which power is fed to the four-wheels. Altogether, not a bad concept in terms of engine as it is certified for a 1000 hours between overhaul.

On the driver side, well, it lacked a gearbox and clutch, the driver only having to handle the throttle or let’s say “the flow” as it idled at more than 50 percent throttle but also had a three second lag between action by the driver and the car actually accelerating. But all that actually didn’t happen before 1967 as the chassis of the car happened to be badly warped during heat treatment and original construction. 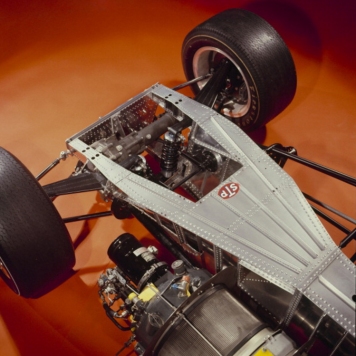 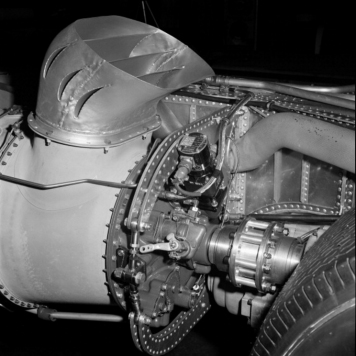 Another interesting fact regarding the build of the car and as declared by Granatelli during an Indianapolis Legends interview back in 2000 was that “Every single thing on the car except the wheels and the turbine engine was built in-house. Everything, and the reason we built everything in-house was because we didn’t want to go to any outside vendor to have them know that we were building a special race car. And when we built the car, it was built completely in the rules, completely in specifications.”

And yes, it did deliver, Parnelli Jones qualified the car in sixth place with an average speed of 166.075 mph for the 1967 Indianapolis 500. From the start and turn No. 2, he took an early lead from Mario Andretti and rarely relinquished it, only for the car to fail on the 197th lap and due to a 6$ ball bearing falling apart in the drivetrain… And off went A.J. Foyt… In-house didn’t work apparently and what a sad end to a beautiful design and great “think turbine” effort.

But what was really sad was that USAC changed the rules drastically after the race, reducing the possible intake area for turbine powered cars from 23.999 square inches to 15.999 in order to reduce the advantage of the design. 1968 would see the turbine and four-wheel drive Lotus 56 wedge shaped design as well as a reworked version of the STP-Paxton Turbocar tackling the Indy 500 only for the four cars to fail during the race with the USAC putting a definitive end to the idea, outlawing turbine engines but also four-wheel drive transmissions…

Last but not least, as Mario Andretti declared in 1967 and prior to the race “…the rest of us will be racing for second place” and as Dan Gurney confirmed when the race was first halted after 18 laps “Well, at least, I’m leading my class”. Which all in all, showed how promising it could have been..! But probably, it was too much for the Offy or Ford community back then, who knows…